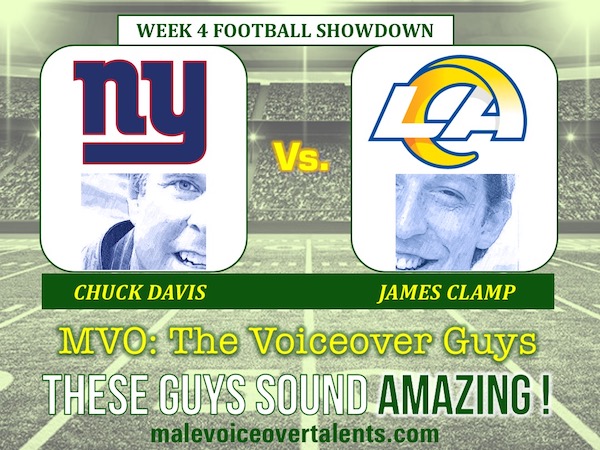 ABOUT CHUCK DAVIS
“I come from the same place your customers do. A family, a home…a real life. Let me tell ‘em about your stuff! I’ve found it’s really pretty good!”

Chuck is a real, straight ahead performer with a wry edge, a wink if you will. No announcers here….unless you really want one. In that case he’ll hold a quick séance and channel one for you. Chuck’s career so far has led him to perform for national TV campaigns for the likes of Prevagen (Quincy Bio Science), Blue Cross Blue Shield “Medicare Advance” (four years running) Osteo Bi-Flex, Verizon Wireless, WORX Air, The US Dept of Homeland Security, Hasbro and Playskool, He’s the ongoing regional voice for scores of clients including Haynes Furniture in Virginia, The Vision Automotive Group in Rochester and the Finger Lakes region of New York, The Cartown Auto Group in Alabama and Kentucky and many more!

ABOUT JAMES CLAMP
James Clamp is an Award Winning young British Voice Over Actor originally from London, England. He collected his first Earphone Award in January 2011

He’s proficient at many accents including RP, Cockney, Northern English, Australian, Scottish, South African, French and Russian. Please feel free to phone or email with any questions, or to request a proposal.