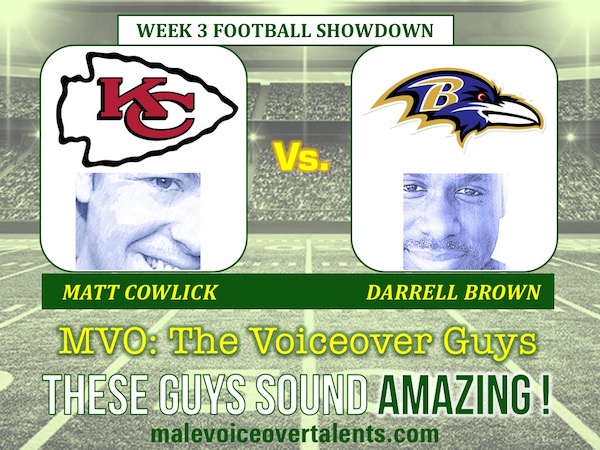 ABOUT MATT COWLRICK
Matt Cowlrick’s career as a male voiceover talent spans over 20 countries, utilizing multiple accents and a variety of voice types and age ranges. His clients include an impressive collection of the world’s top brands and multinational companies. Matt records for commercials (TV, radio and web), animation, corporate and industrial narrations, promos and many other mediums.

Some clients Matt has has the privilege to work with and share his voice acting skills with include: GoDaddy, Chevron, John Deere, Pringles, PayPal, McDonald’s, Jeep, Bosch, EB Games, IBM, Nivea Men and KFC.

ABOUT DARRELL BROWN
Darrell Brown is an African American male voice over talent specializing in commercials, narration, promo and movie trailers. He delivers smooth, rich, engaging sounds for clients such as Google, McDonald’s, Toyota and many others. Since 2008, this veteran voice actor has helped brands all over the world to tell their story and reach general and urban audiences through TV, radio and internet. Whether it be commercial, narration, promo or trailers, Darrell will bring your story to life.