For voice talents like SEAN CALDWELL and PETER K. O’CONNELL, the shortened week after 4th of July can be a blessing or a curse. Either it’s nice because clients take the whole week off so things a just a little less hectic. Or it’s crazed because clients and their deadlines just get that much shorter.

In either case the weekend becomes a nice break.

But last weekend, it got was event more fun because the two voice talents, who have been friends for some years, actually got to hang out.

Peter and his family when they traveled to Atlanta, GA over the 4th weekend to visit with his family there, staying the week. 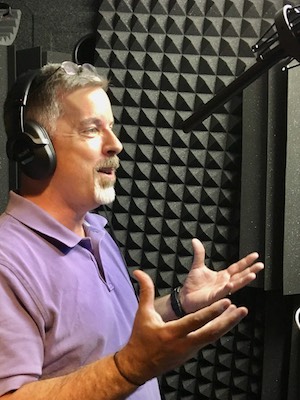 While he was there, Peter put a call out to his friend and fellow voice talent Sean Caldwell who has a summer place outside the ATL on Lake Lanier.

Their families then got together for a fun day on the water.

While he was at Sean’s place, Peter even got to record in Sean’s voiceover booth (pictured). But Peter said even though it was Sean’s booth and Sean’s microphone, he still did not sound as good as Sean.

Somebody must have adjusted the pre-sets on the equipment!

Sean Caldwell is an award-winning voice over talent recording in Tampa, Florida and Atlanta, Georgia. Today Sean serves over 100 clients each month in diverse industries around the world. His work has won awards from NAB, Promax / BDA, The Marconi award, and two Telly awards.

Hi, I’m Peter and I am a voiceover talent.

That was my “short” biography.

Now, if you like, here’s the slightly longer version…

Before Madonna sang about her virginity, when making a phone call from the road meant plunking twenty five cents into a phone booth and back when getting “on-line” meant waiting to check-out at the grocery store, I began my career as a male voiceover talent and live announcer.

I am currently celebrating my 35th year as a professional male voice-over talent.

As America’s friendly, neighborhood voice-over talent, my versatile vocal skills allow me to share many voice acting styles with my clients, who range from Fortune 500 Companies to companies who think $500 is a fortune. From conversational everyman voice to hard sell straight announcer performances, my natural voice over abilities are favored by clients for commercials, narrations, e-learning, documentary, TV promo, radio imaging and live announcing.

People have told me I am a natural born storyteller. I’ve even won some awards for my voiceover work.

OK you’re right, if you’re scoring at home, Dayton, Ohio and Buffalo, New York aren’t really major markets but I have spent so much time there, I felt they deserved a shout-out. A native of Buffalo, NY, I grew up in the Nickel City – I even worked in radio there at WLVL, for, like a week. I truly developed his broadcasting and voice-over skills in Dayton at WVUD-FM as a top rated disc jockey and then as a commercial producer for the station.

I produce my voice projects through my audio production company, audio’connell Voice Over Talent which is a division of O’Connell Communications, LLC. In addition to my voice over work, which represents a majority of the company’s production schedule, audio’connell also provides casting services for clients looking for professional female voiceover and audio production services for national and international clients. The voice over needs of foreign language clients are served through another O’Connell-owned company, International Voice Talents.

Yes, I am also the guy that wrote that voiceover e-book entitled The Voice Over Entrance Exam. The book examines the business and performance realities of becoming a voice-over talent and maintaining a career among a spirited field of established voiceover professionals. Sometimes, when I am feeling very “authory”, I wear an ascot around my house – it’s very obnoxious.

After years of giving away my hard earned knowledge about everything voice over, I decided I should be getting PAID for it so I started audio’connell’s Voice Over Workshop. In private one-on-one voiceover sessions in my studio or via Skype, I teach new and experienced voice talents what I’ve learned after nearly 30 years in the voice over business and critical stuff voice actors need to know to get paid voice jobs.

I received my Bachelor of Arts degree in Radio and Television Communication from the University of Dayton (OH) – no one is quite sure how – nonetheless the official diploma can be found somewhere in my Cary, North Carolina home (just outside of Raleigh, North Carolina) where I live with my wife and children.

Thank you for reading all the way to this point in this overly wordy biography but now you really need to get away from the screen and go do something more productive – even basket weaving would have been a better use of your time, as opposed to reading all the way down to here, but thanks anyway.